The Peaceable Kingdom, by Edward Hicks, 1826. 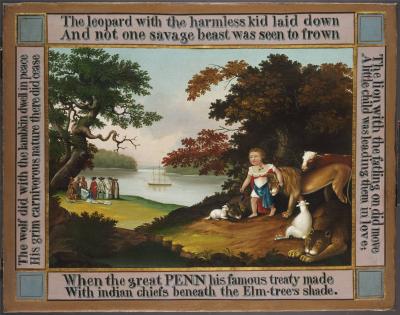 Oil on canvas of child, animals, and Penn's treaty. Inscription reads, "The Leopard and the harmless kid laid down and not one savage beast was seen to frown. The wolf with the lambkin dwell in peace. His grim carnivorous nature there did cease. The lion with the fatling on did move. A little child was leading them in love. When the great PENN his famous treaty made, with Indian Chiefs beneath the elms shade."

Courtesy of the Philadelphia Museum of Art, Bequest of Charles C. Willis, 1956.