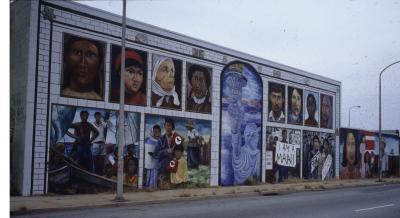 This mural traces the history of immigration in the United States and includes important figures in the civil rights movement who worked to bring harmony amongst all the different races and ethnic backgrounds making up this country. This mural includes the faces of many different cultures. The project began under the auspices of the Philadelphia Anti-Graffiti Network (PAGN) and it was also a "rep" wall, which meant it was a wall where every graffiti writer wrote their name. This immigration mural depicts the history of immigration; especially since Philadelphia is such a racially and ethnically diverse city. Jane Goldman said, "We wanted a mural that would celebrate Philadelphia’s diverse communities and neighborhoods. We spent a lot of time doing research about immigration patterns in Philadelphia. In addition we interviewed a wide variety of community groups and cultural organizations. The best aspect of the project to me was that we worked with a racially diverse crew of kids from all over the city."