Wilson school near Darby, taught by Alexander Wilson, afterward celebrated as an ornithologist. 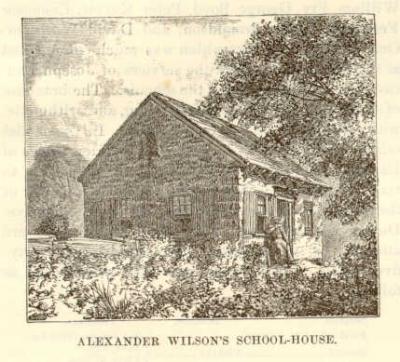 "In the early part of this century, and probably before the close of the last, there was a school near Darby, taught by Alexander Wilson, afterward celebrated as an ornithologist. He was a Scotchman who came over to this country about the year 1794 and while living near Darby was on intimate term with the famous botanist, William Bartram. The building in which he kept school was situated on the Darby road, a short distance west of its intersection with Gray's Ferry road. Wilson, who was of a roving disposition and who had not yet written the book which gave him renown, abandoned the school in 1804, about which time he contributed to the Literary Magazine a long poem of upwards of two hundred lines, recounting the experience of "The Solitary Tutor." Its opening verse was,– 'Whoe'er across the Schuylkill's winding tide, Beyond Gray's Ferry half a mile, has been Down in a bridge built hollow must have spy'd A neat stone school-house on a sloping green. There, tufted cedars scattered round are seen, And stripling poplars planted in a row; Some old gray white-oaks overhang the scene, Pleased to look down upon the youth below, Whose noisy noontide sports no care nor sorrow know. * * * * * * * Here many a tour the lonely tutor takes,– Long known to solitude, his partner dear,– For smiling woods his empty school forsakes At morn, still noon, and silent evening clear.' "