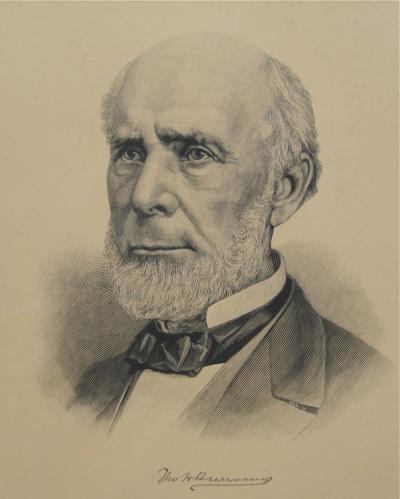 "Burrowes was well known throughout Pennsylvania, especially in educational circles. Though not a college graduate, he had a good academic education [including a year of law at Yale] and had been admitted to the Lancaster bar, but never practiced law extensively. He became active in state politics...member of House of Representatives 1831-32; chairman of the Anti-Masonic Party; secretary of the Commonwealth and ex officio head of the common school system, 1835-39. Thereafter, he farmed in Lancaster County; founded and published the Pennsylvania School Journal; served as state superintendent of common schools, 1860-63; and as superintendent of the soldiers orphan schools, 1863-68. He had had no experience in higher education as teacher or administrator before coming to Penn State at the age of 63 [but had led the movement and framed the law, passed in 1857, for the establishment of Pennsylvania's normal schools, which later became the state teachers' colleges and are now the state colleges and university (Indiana)].... He was noted for his genial disposition, ready wit and conversational powers."