Horse drawn wagons filled with hemlock bark for use in the tanning industry somewhere in northern Pennsylvania, circa 1890. 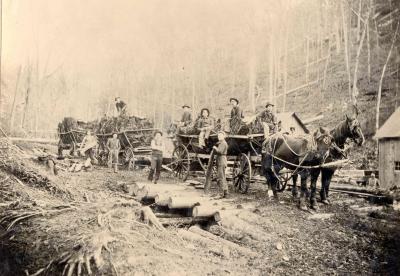 Hemlock produced inferior lumber, but its bark was rich in the tannin used in the curing of leather. Dependent on ready supplies of bark, many tanneries set up near the great stands of hemlock in northern Pennsylvania forests. By the late 1800s hemlock also was used for paper pulp, rough construction work, and boxes. High levels of production led to the rapid exhaustion of the region's forests and widespread pollution of streams and rivers.