Collier, Pennsylvania, looking south along one of its streets, July 23, 1912. 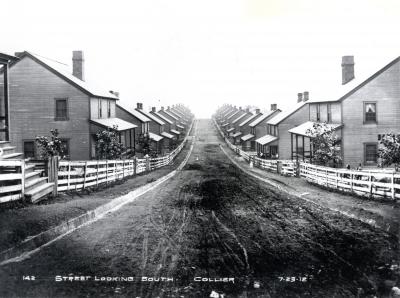 "They were five rows of houses, and the house was only one story high, and they called it Mexico. We lived in a block that was eight rooms, one story, no back porch and no front porch. We had two bedrooms, no, one bedrooms and a kitchen, two rooms. Until [I was] about eight or ten, we lived only in those two rooms. We all slept together, my dad and my mother on a bed and us four children on one, and I enjoyed the floor a lot. In the kitchen we had a coal stove and a cupboard and benches instead of chairs; maybe we had two chairs and a round table … we had no plumbing[no water in the house] we had to go outside to get it. And … up until [ I was] about seven or eight, we had no lights. We had oil lamps. [We had] wooden floor [and we] scrubbed them." Adapted from an Oral History of Anna Giacomalli