Tent colony of evicted Berwind-White families at Mine No. 40, October 1922. 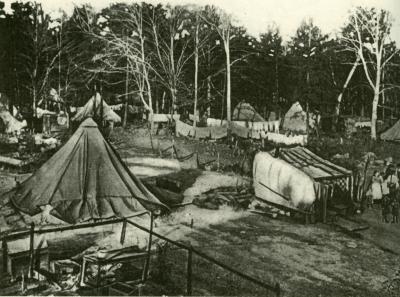 "Well it happened during the 1921-22 strike, and it lasted about a year and a half, and the men had to call the strike because for better pay and for better working conditions. And the men refused to go to work. So the families of the men that had refused to go to work had been evicted … Evicted from their homes. And they were given ten days notice, prior to the eviction, but if they didn't move out [of the company houses], the sheriff came and move them out. And the sheriff would get these people's furniture on a truck, and they would just dump it right on the ground." Adapted from an Oral history of Tekla Skomra