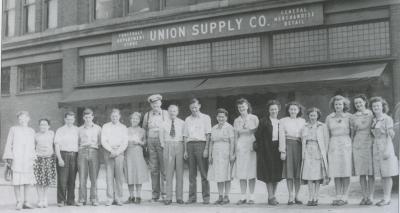 "I worked there for a while, probably less than a year. You did a little bit of everything, mostly clerking. You had sales slips that were all duplicated. People would come in, and whatever they bought you had to write it down. You handled no cash; that was handled in the office. It was a check-off basis. They took out of your pay what you owed when you worked for Frick at the coal mine, before you got paid. When they said you owed your soul to the company store that is true. We had a little spring type of clipboard, and we would keep those slips from payday to payday. You could tally-up and see what they took out of your husbands pay and what they said you owed. You [the sales lady] were the jack of all trades. I sold gas and I sold yard goods. You could buy bedding, furniture, and appliances too. Gas was fifteen cents a gallon and people thought that was high. I was getting eighteen dollars a week for forty hours work. You could have bought things cheaper in town if you had cash." Adapted from an oral history of Elsie Hunchuck Stepanovich