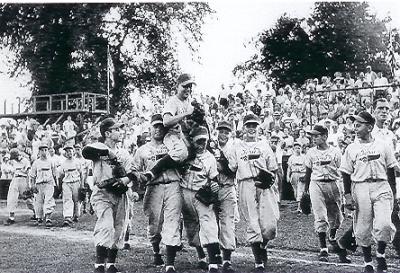 Texas Beats Connecticut in Battle for 1950 Crown. The Williamsport based national newspaper, GRIT, reports "The Big sate of Texas is the Little League Baseball Champion of the world this morning, and the greatest show in all boydom has come to close for another year." Houston beat Bridgeport, Conn. 2-1 behind a strong arm pitcher named Billy Martin, a lad of 12, who went into the championship game with two consecutive no-hitters to his credit. Governor James H. Duff of Pennsylvania whiffed Ford Frick, President of the National League, with the first toss to Frank Shaughnessy, President of the International league. Every last seat in the stands and every square foot of standing room on the dike was taken by an avid Little League Fan.