The H.C. Frick Coal and Coke Corporation's Edenborn Mine after shooting of 12 coal strikers, outside Brownsville, PA., November, 1941. 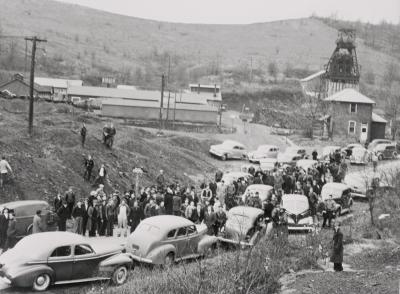 Still attempting to recover from the Great Depression, Pennsylvania workers staged a series of strikes in 1941, including a walk out by soft coal miners working for the H.C. Frick Coal and Coke Corporation. After 12 strike pickets were ambushed and shot in a gully near the Edenborn Mine outside Brownsville, Governor Arthur H. James, on November 21, ordered state troopers there to restore order. Pennsylvania witnessed fewer strikes after American entry into the war and the surge in industrial production. Pennsylvania coal miners, however, would go out on strike again in 1943.