General Meade and Pennsylvania troops in camp before Gettysburg, by Violet Oakley. Displayed in the Pennsylvania State Capitol building, on the north wall, panel 5, troops of the Civil War. 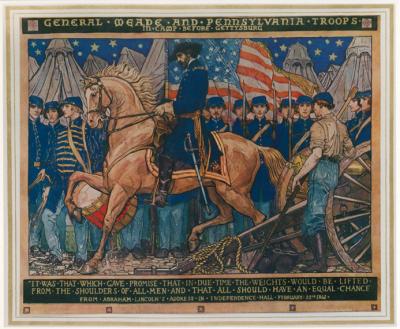 The Union victory at Gettysburg would go on to become one of the most celebrated battles of American history. George Meade, however, would not receive the adulation that the public bestowed Grant, Sherman, and other Civil War generals. In the 1920s, however, Violet Oakley painted this mural which now hangs in the Pennsylvania Senate, placing him alongside Commonwealth heroes William Penn and George Washington.