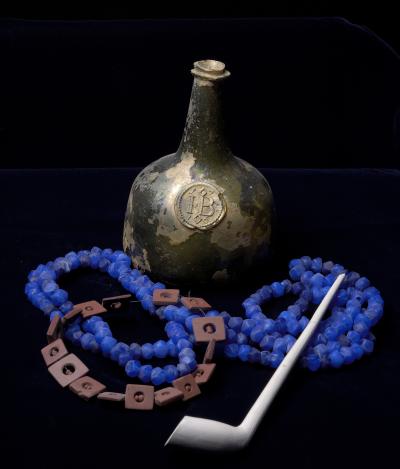 These artifacts, found at the Conoy Indian Town site by a State Museum archaeology team in 1970, represent the enormous change that swept through Pennsylvania's Native American cultures in the 1700s. As the fur trade spread, Native peoples developed a dependency on European-made items, including metal pots and weapons, glass beads, tobacco pipes, and alcohol (represented by the glass wine bottle). Although the string of red catlinite beads seen here are native-made, it is likely they were also acquired in trade, for catlinite is a mineral found in the Northern Plains Region of North America.

The State Museum of Pennsylvania, Archaeology